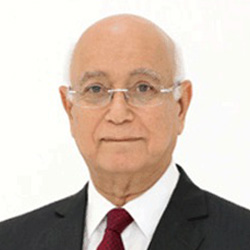 Prof. Hossam Hamdi is a Professor of Surgery and Medical Education. An internationally known medical educator and active Pediatric Surgeon. A scholar, professional, and leader in higher education in the Middle East and renowned internationally for the last 40 years, he has established several Medical Colleges in Egypt, Bahrain, and UAE. He has served in different senior academic and administrative positions as Chancellor, Gulf Medical University, Vice-Chancellor Medical & Health Science Colleges, Sharjah University, Director of the Institute of Leadership in Higher Education, Sharjah University, and Dean College of Medicine, Arabian Gulf University, Bahrain.

His work and contribution to Medicine and Medical Education over more than 40 years has been acknowledged and has won him many awards: The Sheikh Khalifa Award for Higher Education for “Distinguished Professor in Teaching”, led the College of Medicine, Arabian Gulf University to win the “Sheikh Hamdan Bin Rashid Al Maktoum Award” for Best Medical College in the Arab world, “Fellow of the Royal College of Surgeons of England “By-Election” 2010”, and “Fellow of the Royal College of Physician of England 2016”.

Prof. Hossam Hamdi was decorated in 2011 by the Republic of France with the prestigious decoration as “Chevalier Dans L’ordre Des Palmes Academiques” / “Knight of the Order of Academic Palms” for his achievements in Medical Education.