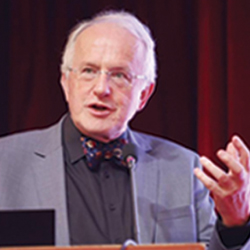 After qualifying from the University of Cambridge, Professor Gordon held research, academic and clinical
appointments in Leicester, Cambridge, and London. He joined the Wellcome Trust during the period of its expansion to become the world’s largest endowed foundation and the world’s largest non-governmental funder of biomedical research. He was dean of the medical faculty in Manchester for seven years and chair of the Council of Heads of Medical Schools in the UK.

Prof. David Gordon has been President of the World Federation for Medical Education (WFME) since 2015. WFME is an umbrella organization for the six worldwide Regional Associations for Medical, Education, and in additional to its formal relationship with WHO, WFME is associated with other global
bodies concerned with medicine and medical education. He had previously been President of the Association of Medical Schools in Europe is an emeritus professor of medicine at the University of Manchester, and holds several visiting professorships. He was president of the Association of Medical Schools in Europe from 2004 – 2013.
He has lectured extensively, particularly in central and Eastern Europe, in the Middle East, and in countries of the former Soviet Union. And has an immense contribution to Medical education through research, mentorship, and leadership.

All Sessions by Prof. David Gordon